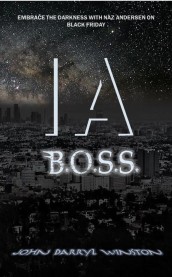 Embrace the Darkness with Naz Andersen on Black Friday

After days and nights of blood, sweat, and tears, IA: B.O.S.S. is finally here.

This is my very heart and soul friends, family, and followers.

If you’ve ever wondered who I am, who I really am, preorder, receive, and read my novel. And even if you didn’t wonder, buy it to support. Buy it for the young readers that have no hero, or superhero of color to aspire to.

The reviews are in. Readers and critics alike agree; the IA series is a movie series in the making.

The ebook will be released November 27th, Black Friday. Fitting, as the events in the novel occur on or around Black Friday. So preorder IA: B.O.S.S. today for $0.99. Click here to order.

The price goes up on release day, so don’t miss out on being a part of an exciting new YA series. Witness the birth of a superhero for all, for the price of a cheeseburger from McDonald’s!

“Continuing the saga of our young hero, Winston reinforces that we may stumble, fall, even backslide, but if we’re patient, if we dig deep enough, our abilities are there. IA: B.O.S.S. is a glorious ride of striving for strength, confidence, and retaining the humanity within.”  —Paul Atreides, Theater Critic for the Las Vegas Review-Journal

High and hidden in the San Juan Mountains, a black Crown Victoria with tinted windows parks behind a black Suburban in front of a rustic cabin. Two men in dark suits exit the car and approach the front door confidently, but cautiously. A sharp, mid-day breeze whips through the monstrous pines guarding the cabin causing the suit jackets of the men to flare. They are armed.

“Remember, no harm must come to the boy,” says the stockier of the two men as he pulls a tranquilizer gun from his holster.

“What about Dr. Andersen?” whispers the taller man as they stop at the cabin door.

“Our instructions are clear; no harm must come to the boy.”

The taller man nods as he pulls a Glock from his holster then knocks on the door in an official manner. They wait several seconds, but there is no response. He knocks again and this time calls out.

There is still no response. He steps back several feet with both hands on his Glock, shoulder height. He means to break the door down, but before he can advance, his partner stops him with a hand gesture.

The shorter man reaches down and grabs the doorknob to find the door unlocked. He slowly opens the door. The taller man returns to his original position next to his partner. Both men ready their weapons as they slowly enter the cabin. They look at each other in confusion as they find a tranquil scene.

Hair wild atop his head, Dr. Cornelius Andersen, known to his few friends as Cory, is playing chess with his ten-year-old son, Naz. Both seem oblivious to the two men entering the cabin.

The men nervously train their weapons on the father and son: the shorter man with his tranquilizer gun pointed at Naz and the other with his Glock pointed at Cory.

Unmoved, Cory and Naz continue their game as if they are the only two in the room.

“D-Dr. Andersen,” stammers the shorter man. “I must insist that you and your son come with us.”

“Your move,” says Cory to Naz.

“Fine, then you leave us no choice, sir.” The shorter man looks at his partner and nods.

Before the shorter man can fire his weapon, the two men are distracted by what sounds like footsteps on the roof. When they look up, two separate laser beams come from projectors high in the ceiling aimed toward Cory and Naz. The taller man reaches up to block one of the beams. Cory and half of the chessboard disappear.

The man smiles in amusement and awe, his hand still high in the air above his head.

“It’s a trick,” says the shorter man, realizing the image of Cory and Naz is a hologram.

“Your move,” the recorded voice of Cory repeats although the image of Cory is no longer there.

Meanwhile, outside, Cory and Naz scramble down the roof of the front of the cabin. Cory hangs from the edge of the cabin, releases, and lands on the ground while Naz, a miniature version of Cory in every way, prefers to dismount the roof with a back somersault. Naz looks at his father with a smile for approval, but Cory shakes his head and, with a sense of urgency, motions for Naz to hurry.

The taller man moves his hand away from the beam causing Cory’s image and the other half of the chessboard reappear.

Footsteps sound from behind them and the two men turn as Cory and Naz run toward the black Suburban.

The shorter man runs after them. “Stop!”

Naz looks at Cory, who nods.

The shorter man fires a black tranquilizer dart at Naz. Naz clenches his fists and watches the dart intently as it slows and comes to a complete stop midair between the shorter man and himself. Naz again looks at Cory, who shakes his head. The dart spins around one hundred eighty degrees to point back at the shorter man.

“No,” says Cory to Naz calmly.

Naz quickly opens both his hands causing the dart to return to full velocity, impaling itself in the stocky man’s beefy thigh. He slumps to the ground, unconscious. Before his partner can return fire in Cory’s direction, Naz snaps his right arm over his head. The man’s Glock flies high into air behind the cabin. The man stands frozen in fear and amazement as he looks back and forth between his unconscious partner and Naz.

They get into the Suburban and drive down the mountain.